The Living Rare, Living Stronger Patient and Family Forum, originally set for May 14–16 in Cleveland, Ohio, has been postponed until July 18–20 because of the coronavirus disease COVID-19 pandemic.

The event’s sponsor, the National Organization for Rare Disorders (NORD), said it will still take place at the Renaissance Cleveland Hotel, and this year’s Rare Impact Awards at the nearby Rock & Roll Hall of Fame and Museum. Zebra T-shirts on sale at the 2019 NORD Patient & Family Forum in Houston. (Photos by Larry Luxner)

In the spirit of music, NORD is partnering with the nonprofit group Sing Me a Story to create songs for kids with rare diseases.

Sing Me a Story works with more  than 4,000 songwriters to help turn the stories that children in need write and illustrate into music. In this instance, through sponsorship by Horizon Therapeutics, the organization is focusing on the rare disease community.

“The one thing that every child has regardless of circumstance is imagination, and it’s our goal to bring those imaginations to the world through music,” said founder and songwriter Austin Atterberry, 36, whose nonprofit is based in Woodbury, Minnesota.

Children ages 3 to 17 entered a raffle for the chance to win a trip to the forum and have their story told through an original song. Atterberry said the songwriter likely will reside in the Cleveland area and perform the song at the forum’s welcome reception.

Sing Me a Story also will talk to other children with rare diseases at the forum and potentially add the musical version of their stories to the nearly 1,000 songs it has produced. Individuals can support a song by donating a 50/50 split to Sing Me a Story and the partner organization from which the story came. In return, they will get the original music file.

“When you have a rare disease you feel really isolated and when you tell your story you start to learn you’re not alone,” said Debbie Drell, NORD’s associate director of membership. 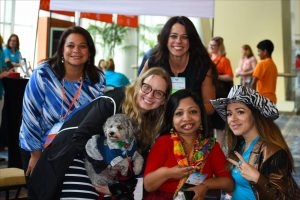 Participants at the 2019 NORD Patient & Family Forum in Houston.

NORD, a patient advocacy group, began as a grassroots rare disease coalition created to pass the Orphan Drug Act of 1983. Nearly 300 such groups belong to NORD, which focuses on increasing awareness of rare diseases, improving access to therapies, and raising money for research.

“Who doesn’t want to maximize our precious time we have on Earth?” Drell asked. “You do that by making connections and learning, being inspired and sharing your story.”

Atterberry’s own story began when he moved to Nashville after graduating from Northwestern University. A young woman moved into his apartment complex, and to impress her Atterberry became a music volunteer at her workplace, Vanderbilt Children’s Hospital, in 2010. They now are married with two children.

In an attempt to involve the children he worked with, Atterberry decided to take whatever story they came up with and turn it into a song. He would go home, record an mp3 file and give it to the kids’ families. Atterberry later put the process online, and in 2011 incorporated the organization.

For the songwriter, bringing music to children with rare diseases is a chance to show outsiders the community’s resilience. “The bravery, the courage they all show to forge through the world and oftentimes forge their own path when it comes to patient advocacy is truly inspiring,” Atterberry said.

Sing Me a Story has worked with rare-disease patients before. One of them is Ariella, a 15-year-old girl with urea cycle disorder, who wrote about the difficulty of living a normal life. Singer-songwriter Amy Lowe turned Ariella’s story into an upbeat song.

“My music is love, love, love away from the crowds / I write the story, I paint the scene / I fill it with glory inside my dreams,” Lowe sings in the chorus, ending with these two lines: “You see a part of me it’s not the heart of me / I’m not what I seem.”

The Living Rare, Living Stronger forum offers resources for caregivers, patients and family, as well as opportunities to meet other people in the same situation. It also includes the Rare Impact Awards. This year’s winners include Grammy Award-winning rock guitarist Peter Frampton, as well as Sen. Sherrod Brown, D-Ohio, and 10 other top achievers.

In addition, NORD will present a lifetime achievement award to Janet Woodcock, MD, director of the Center for Drug Evaluation and Research at the U.S. Food and Drug Administration.

Hawken Miller Hawken graduated from the University of Southern California (USC) in 2019. Before joining BioNews, he wrote for the Washington Post’s video game and esports section, Launcher, where he still contributes as a freelancer. Hawken is also a columnist for BioNews, focusing on his experience with Duchenne muscular dystrophy for Muscular Dystrophy News Today. His work has appeared in Dot Esports, The Orange County Register, KTLA 5, and The Sacramento Bee. He won a Webby for virtual reality journalism at USC.