The gleaming new Dutch headquarters of the European Medicines Agency (EMA), fronting Domenico Scarlattilaan in Amsterdam’s suburban Zuidas business district, finally opened for business last month — just over two years after the European Union decided to relocate the EMA to the Netherlands in the wake of Brexit.

“A year ago, we lowered the flags in our London offices with a heavy heart,” Guido Rasi, EMA’s executive director, said Feb. 3 as the flags of the 27 remaining EU member states were installed in the lobby of the new EMA headquarters. “With this flag-raising ceremony in our new Amsterdam home, we can now close the chapter of our relocation, look to the future and finally refocus fully on our public health mission.” 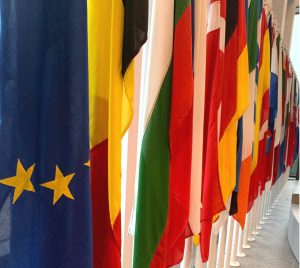 More specifically, that means the EMA — which on Jan. 26 marked its 25th anniversary — can get back to the business of promoting effective medical therapies, especially for the roughly 25 million rare-disease patients who live within the EU’s borders.

The agency operates on an annual budget of €317 million (about $350 million) and employs 780 people, with the largest numbers of staffers coming from Italy, Spain, and France.

Violeta Stoyanova, MD, chairs the EMA’s Committee for Orphan Medicinal Products (COMP). In 2000, EMA established the committee — one of seven — to evaluate applications for orphan designation of medicines for rare diseases.

To qualify for orphan designation, a medicine must intend to treat, prevent, or diagnose a disease that is life-threatening or chronically debilitating. In addition, the prevalence of the condition among the EU’s 27 member states cannot exceed five in 10,000, or it must be unlikely that sales of the medicine would generate sufficient returns to justify the investment needed to develop it.

“In 2000, the European Commission approved specific legislation meant to incentivize development of drugs for rare diseases, since this is not an attractive market for pharma companies,” Stoyanova said in an exclusive interview with BioNews Services, which publishes this site. “In the end, it’s all about bringing new products to the European market.”

EMA: Not the FDA

The EU is currently home to 445 million people as well as some of the world’s largest orphan drug markets, including France, Germany, Italy, and the Netherlands.

Yet not all orphan-designated medicines reach the marketing authorization application stage. Those that do are evaluated by the EMA’s Committee for Medicinal Products for Human Use — using the same strict safety and efficacy standards that apply to all therapies evaluated by the EMA. At present, more than 140 orphan medicines are authorized in the EU. “Under the European legislation, anyone can apply for an orphan designation at any stage of drug development,” Stoyanova said. “That means a group of scientists can come to the committee showing data from early experiments in animal models for a disease they want to develop a drug for. It can also be the development is further along, and there is some clinical data in a few patients. If the data is sufficient and all criteria are fulfilled, then the sponsor receives an orphan status for the product, meaning it’s eligible for pre-marketing incentives.”

In addition, sponsors must demonstrate proof-of-concept, or evidence of medical plausibility.

“If, for example, someone wants to develop a drug for cystic fibrosis, the experiments should be done in animals of CF or patients with CF and not another disease,” she explained. “One criteria which is specific for Europe is that when coming to the market, the drug must either be the first in its kind for this specific disease, or if other medicinal products or methods of treatment exist, like surgery, the new orphan drug has to be in some way superior or show significant benefits, meaning it will change the life of rare-disease patients.”

Stoyanova added that sponsors may be eligible for different types of scientific grants meant to encourage the development of therapies for rare diseases.

“In general, we shouldn’t compare the European and U.S. systems, simply because we work under different legislation,” she said. “With so many member states, we have to reach a consensus. Everyone discusses and then votes. That’s very different than the way the FDA comes to a decision.”

One difference, she pointed out, is that “certain drugs might not comply or fulfill the criteria, therefore they come to the market but not as orphans. This is something that can happen in Europe but not in the U.S. because there isn’t a requirement that one drug be better than the previous one.” Stoyanova said EMA’s most attractive financial incentive is 10 years of market exclusivity as long as a particular therapy maintains orphan status, meaning another product which is similar cannot come to market.

“But there are all kinds of caveats to that,” she said. “At Year 5, a member state could trigger a reassessment. Therefore, exclusivity could be shorter.”

Therapies approved by the EMA in 2018 include Lamzede (velmanase alfa), a long-term enzyme replacement therapy to treat mild-to-moderate forms of alpha-mannosidosis, a lysosomal storage disorder; Mepsevii (vestronidase alfa), for the treatment of mucopolysaccharidosis type VII, also a lysosomal storage disorder; and Namuscla (mexiletine hcl), a treatment for myotonia, or muscle stiffness in adults with non-dystrophic myotonic disorders, a group of inherited muscle disorders.

Stoyanova, a molecular geneticist by training, was educated in her native Bulgaria as well as at the International Centre of Genetic Engineering at Biotechnology in Trieste, Italy, and at several Dutch institutions, including Erasmus Medical Centre in Rotterdam, University College Utrecht, and the University of Amsterdam.

EMA looks to the future

Stoyanova has chaired COMP since September 2018, when she was elected to a three-year term. Besides Stoyanova, COMP consists of delegates nominated by each of the EU’s 27 member states, plus one member nominated by Iceland and Norway.

In addition, the committee includes three patient delegates, who currently represent the Dravet Syndrome European Federation, a Dutch network of rare cancer patients, and the Italian foundation for thalassemia. There’s also an observer from the Paris-based Eurordis who attends all meetings, as well as three experts — clinicians or university professors — appointed by the EU to provide additional guidance in areas where it is needed or lacking.

COMP convenes once a month for three days at EMA’s Amsterdam headquarters to discuss pending applications.

Asked about the possible near-term EMA approval of gene therapies such as Novartis’ Zolgensma for SMA — which carries a U.S. retail price of $2.125 million for a one-time dose — Stoyanova chose her words carefully.

“Everyone was very enthusiastic when we discussed the potential of gene therapy many years ago,” she said. “We thought that if you’re able to replace the mutated gene with a normal one, the disease can be potentially cured. Now that we’ve had more experience with some of the first gene therapies, it’s become clear that one should be much more cautious in deciding which patients to treat, and when to treat.”